GEORGE Clooney knew that wife Amal was the one just three months after they first went out together. 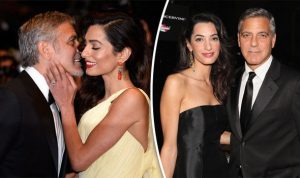 The 56-year old, who vowed never to wed again following his short-lived union with actress Talia Balsam betweem 1989 and 1993, says it wasn’t long after his and Amal’s first date in October 2013 that he realised he was ready to pop the question.

“We spent [our first] Christmas together in Cabo San Lucas. Then we went on a safari in Kenya,” he says. “I had a picture of her, looking back, smiling at these giraffes and I said, ‘I think I’m going to ask her to marry me’.”

The Ocean’s Eleven star admits he then began meticulously planning his proposal to the human rights barrister, including buying a ring and compiling music by his late aunt, the singer Rosemary Clooney. Then on April 28, 2014, the plan came together.
“I did pasta of some form – not that impressive – and then over champagne after dinner I told her there was a lighter to light the candle in the drawer and she reached back and pulled out a ring. I got down on my knee and did all the things you’re supposed to do.”

George then faced an agonising 20-minute wait before the 39-yearold eventually said yes. The pair married in September 2014 and had twins Alexander and Ella in June.

He adds: “I’m sorry I was 50-something when it happened because I could have spent even more time with her.”
FORMER Downton star JOANNE FROGGATT opted for the rather less than conventional sport of kayaking instead of cycling as her new character’s sporting interest because she had never learned to ride a bike.

Joanne, 37, plays teacher Laura who tells police she has been a victim of date rape in the ITV six-part drama Liar beginning on Monday.

And she says: “I couldn’t kayak before this, it’s a new skill. There was a discussion that she should have some sort of sport and this would be her release.

Riding a bike was mentioned and I said, ‘I can’t ride a bike’. I preferred to learn to kayak than to ride a bike!” Joanne, who fi lmed her canoe scenes on salt marshes at Tollesbury in Essex, adds: “I enjoyed it and I may carry on doing it.” We bet she doesn’t. 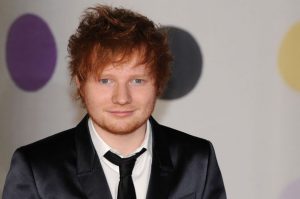 LIAM GALLAGHER, Ed Sheeran, and rapper of the moment Stormzy are the most nominated British artists for this year’s Q Awards.

One of the music industry’s most prestigious events will see all three fighting it out for Best Solo Act while Ed and Liam will go head-tohead for the title of Best Track, with the winners revealed in a ceremony held at The Roundhouse in Camden, north London on October 18.

Bake Off her seal of approval to the opinion-dividing appointment of comedian on the new series.

With only Paul Hollywood defecting from the Beeb when the show moved to Channel 4, the likes of Sandi Toksvig and Prue Leith were hired but it was the appointment of the former Never Mind The Buzzcocks team captain which proved the biggest talker. However Mary’s clearly a fan, telling Day & Night:

“I think Noel is fun. A bit wild but I think it is nice to have someone nice and young.” She also reveals she has offered Prue a few tips, reminding her of Cilla Black’s best clothing advice: “You have got to have a different jacket or outfit for each show!”