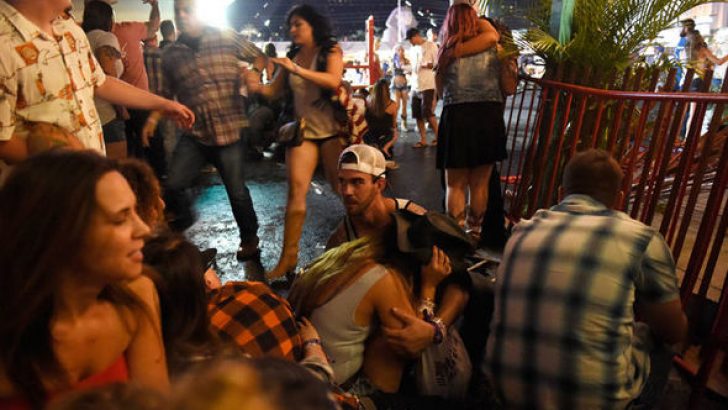 MORE than 58 people have been killed and 500 injured in a mass shooting at a country music festival in Las Vegas.

The suspected gunman has been shot and killed by police who raced to the scene after receiving reports of an “active shooter” near the Mandalay Bay casino and hotel on the world famous Strip which is popular with tourists from all over the world.

Sheriff Joseph Lombardo of Las Vegas Metropolitan Police Department (LVMPD) said the suspected gunman was is dead but his companion Marilou Danley was still at large and a person of interest.

He said: “We have not located her at this time and are interested in talking to her.”

Sheriff Lombardo said the gunman was tracked down to the 32nd floor of the Mandalay Bay where he was shot and killed.

The suspect has been identified as a Las Vegas resident but his name has yet to be released by the LVMPD. Sheriff Lombardo said: “The primary aggressor is dead the scene is static.“The dead man lived locally and his motives are not known.

“There were no explosives involved in the attack but police used a controlled explosion to get to the suspect.”

According to witnesses, the gunman opened fire on revellers during the closing stages of the Route 91 Harvest country music festival.

There were scenes of chaos when the crowd of around 40,000 people tried to run for cover.

LVMPD said on Twitter: “Confirming that one suspect is down. This is an active investigation. Again, please do not head down to the Strip at this time.

“At this time we do not believe there are any more shooters.”

Hospital officials said “multiple” casualties had been rushed to hospital with gunshot wounds after the attack which began at about 11pm local time.

Several SWAT teams raced to the hotel and officers reported being pinned down by gunfire, according to reports.

One eyewitness said the hotel was on lockdown, while another claimed there there possibly two gunmen on the 32nd floor of the hotel who had shot at a bodyguard and police.

Gunfire could be heard from the scene as the police operation continued.

LVMPD warned people to avoid the south end of the Strip. Flights into the city’s McCarran International Airport have been diverted due to the incident.

The attack came during the last performances on the final night of the three-day music festival , which has been held for the past four years on an 15-acre lot across Las Vegas Boulevard from Mandalay Bay.

Country singer Jason Aldean was playing near the end of the concert when gunfire rang out.

The shots appeared to come from upper-level rooms of the Mandalay Bay. Video showed country Aldean mid-song at the open-air venue when bursts of automatic gunfire rang out in rapid succession.

The shooting went on for about 10 seconds before the music stopped.

The crowd appeared slow to move at first but then began running and screaming.

Another wave of gunshots followed soon after.

He said he saw dozens of ambulances arriving as he ran for safety amid the crowd of arouund 40,000. Stunned festival-goers have described the scene as pandemonium

He told NBC News he heard gunshots but the band continued playing. Further gunshots followed and the band ran off stage.

He said: ”Everyone was running, people were getting trampled.

“We ran as quick as we could into hotel and tried to get on the elevator but couldn’t get in. Everyone was running for safety.” Country star Jason Aldean was performing as shots rang out

Witness Ivetta Saldana, who was the show with a friend, said Jason Aldean stopped in the middle of his performance and was rushed off the stage.

She said: “It was was a horror show. People were standing around, then they hit the floor.”

Ms Saldana said she fled the scene and hid in a sewer.

Another witness told Sky News: “A lot of us have been saying this has been a long time coming and look at us now.

“At lot of people have been shot, it’s horrible, disgusting – makes me sick.” An off-duty police officer is understood to have been shot and wounded in the Las Vegas attack.

Local media reported several off-duty Bakersfield Police Officers were at the festival when the shooting began.

At least one of the officers suffered gunshot wounds and was taken to hospital with non-life threatening injuries.

Some of the officers also witnessed the gunfire, but say they were not in position to return fire.

Bakersfield Police Department released a statement which said: ”We extend our thoughts and prayers to the victims of this brutal act, as well as to the first responders of the Las Vegas Metro Police Department, Las Vegas Fire and Rescue, and Las Vegas emergency medical services.”