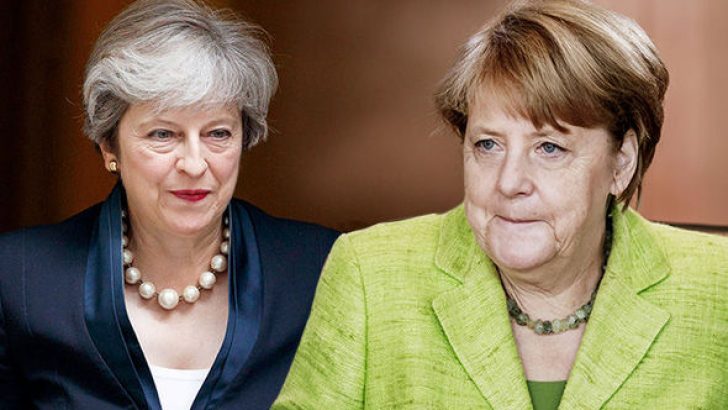 GERMANY’S poorer regions face European Union funding cuts after Brexit, according to a key report on unity in the country.

Leaders in cash-strapped eastern states are particularly concerned for their future finances with Brussels having to restructure its entire support structure when Britain stops pouring cash into the bloc’s coffers.

And Angela Merkel’s government has accepted Brexit could jeopardise the promotion of Germany’s eastern regions.

The German government’s annual reports highlighted fears that Britain’s departure could have a negative impact on the promotion of structurally weak regions.
It said: “The gross domestic product per capita in the EU will decrease with the departure of Great Britain.

Berlin has also been benefiting from funding programmes from the EU for years and has been to Brussels for clarification on the implications of Brexit.

EU Budget Commissioner Günther Oettinger reminded city officials that the times of the well-filled Brussels coffers are now over.

And he warned that the financial opportunities the EU will have after 2020 is not yet foreseeable as Brexit will remove an important net contributor from 2019 onwards.

Delegates from the state of Mecklenburg-Western Pomerania (MWP) have also been in Brussels this week for a series of talks and cash is high on the agenda.

MWP Social Democrat spokesman Thomas Krüger said: “We delegates want to hear where cuts will have to be made in future, and what possible reductions in the structural aid could mean for the north-east.”

Mr Kruger said Brexit would “rip a hole of around €10billion (£9.2bn) into the EU budget” and that a total of €28billion (£26bn) had been reserved for structural support in the German states until 2021.

Brandenburg finance minister Christian Gorke said the state must not be disadvantaged by the future budget savings by Brussels.

The German state surrounds the capital of Berlin and depends on EU funds.
About half of the state of Brandenburg’s area is used for agriculture and roughly another third is covered by forests.

Every year, Brussels contributes around £304million in direct payments to Brandenburg farmers and around £276m to the allocation of structural funds.

Britain is a major contributor to the EU along with Germany, France and the Netherlands and other countries might have to cough up more cash to make up for the shortfall after Brexit.

This week Brussels insisted the UK would have to pay double contributions to the EU when the country quits the bloc.