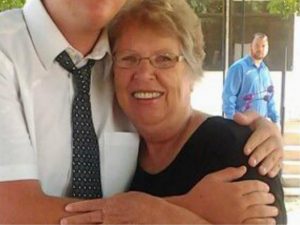 Police have confirmed that Devin Kelley, the gunman who killed 26 and injured 20 in the Texas church mass shooting, also killed his grandmother-in-law in the church.

Mr Kelley’s in-laws and second wife Danielle were also members of the church, but none were present during the day of the shooting according to police.

He was in the US Air Force between 2010 and 2014 at the Logistics Readiness at Holloman Air Force Base in New Mexico.

US Air Force Spokeswoman Ann Stefanek said Mr Kelley served 12 months’ confinement after a 2012 court-martial for abusing his wife and child. It resulted in a reduction in rank and eventual “bad conduct discharge,” which can prevent a person from obtaining a permit to own a firearm.

Authorities are still investigating exactly how Mr Kelley was able to purchase four firearms in consecutive years from 2014 to 2017, according to the Alcohol, Tobacco, and Firearms law enforcement agency Special Agent in Charge Fred Milanowski.

Mary Mishler Clyburn, Ms White’s sister, told the New York Daily News that “the whole family is very devastated. This is not something we ever expected. It’s just, I don’t know how to put it into words. They’re hurting a lot.”

The information led Freeman Martin of the Texas Department of Public Safety to say that the massacre was “not racially motivated. It wasn’t over religious beliefs” but a “domestic situation.”

There is reportedly video from inside the church of the service but police have not released details on the tape as yet.

Police vehicles were spotted outside of Mr Kelley’s listed address in New Braunfels, Texas residence, about 35 miles (56 km) away from Sutherland Springs.

Those killed in the church ranged from 17 months of age to 77 years old.

One of the victims was 14-year-old Annabelle Pomeroy, the daughter of the First Baptist Church’s Pastor Frank Pomeroy and wife Sherry.

The Pomeroys were actually out of town during the Sunday service which their daughter had attended with other relatives.

Her father said Annabelle “was one very beautiful, special child” and Ms Pomeroy issued a statement in which she the congregation was more like a family than just those attending the same church, which made the losses even worse.
Mr Kelley entered the church during a Sunday service, decked in black tactical gear including a mask.

He was reportedly carrying an AR-15 assault rifle and a handgun.

While leaving the church he was shot and chased down by neighbours of the church, eventually shooting himself. It is unclear at this time which injury killed him.