STAR WARS 8 The Last Jedi will have a Snoke and Emperor Palpatine scene, as suggested by a new LEGO set.

He may have been killed by Darth Vader at the end of Return of the Jedi, but it looks like The Emperor will return for Star Wars: The Last Jedi in some form.

In his new YouTube video, Star Wars theorist Mike Zeroh said: “A couple of months ago there was a big leak, a big rumour, that surfaced on the internet, that Supreme Leader Snoke owns a Palpatine hologram.

“[One] that he will actually show to Kylo Ren…so that Kylo Ren can actually understand his grandfather, Darth Vader, all the more in this film.”

He pointed out that Walmart and The Brick People’s website have LEGO sets of Snoke with a hologram for sale. 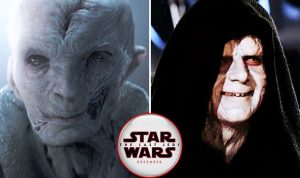 “Now we also heard a lot of rumours in the past before that Ian McDiarmid would return to do some minor work in The Last Jedi.

“However those rumours actually ended up being false. So I don’t think we’re gonna get Emperor Palpatine himself, or the voice of Ian doing it.

“They are most likely going to be using old footage from either…Revenge of the Sith or something from the prequels or the original trilogy, to essentially make a miniature Palpatine hologram in the hand of Supreme Leader Snoke.”

“I think we’re definitely going to have a very cool scene between both Snoke and Kylo Ren…with a…hologram being presented.”