GAME OF THRONES season 7 came to a breath-taking close packed with deaths and revelations. But how many episodes are left in the hit series?

How many episodes are in Game of Thrones season 7 ?

Season seven came to a close with an 80-minute finale which saw Jon and Daenerys meet with Cersei Lannister.

After a last-minute intervention from Tyrion, the warring queens agreed to a truce in order to fight the White Walkers.

But scheming Cersei soon revealed that she was bluffing, and that she planned to use the North’s fight against the dead to her advantage.

In Winterfell, Sansa and Arya Stark outwitted Littlefinger for the final time before executing him for treason and murder.

Samwell Tarly visited Bran Stark, who finally confirmed that Jon is the son of Rhaegar Targaryen and Lyanna Stark, and is actually named Aegon Targaryen.

A flashback vision also revealed that Rhargar and Lyanna were married before Jon’s birth, making him the rightful heir to the Iron Throne.

The reveal was complicated by the fact that at the same moment, Jon was sleeping with Daenerys, his aunt.

In the closing scene, the Night King used his dragon to bring down the Wall, setting the scene for a climactic battle between the living and the dead in season eight.
Season seven was made up of just seven episodes, down from the usual ten.

Despite the shorter run, the season was packed with more action than any that has come before it.

Some fans even complained that the notoriously glacial drama is now speeding through major moments too quickly.

The cast spent the same amount of time filming as they usually would for the compressed season, which has featured several extended running times.

“There are less episodes this year, so they spent more money on those episodes. So, the whole scale of it is up.” 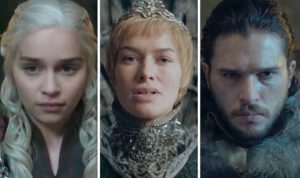 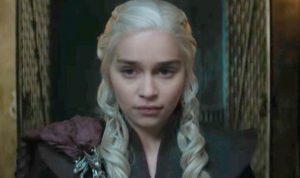 Daenerys Targaryen storms to the Iron Throne in the new trailer

Iain Glen, who plays Ser Jorah Mormont, added: “I think the scale and size of the set pieces, the world that is being created, it’s just getting more and more extraordinary and they feel they need that time to shoot seven hours as opposed to 10.”

Here is a full list of the episodes and their running time:

How many episodes are in Game of Thrones season 8?

Next year’s run will be even shorter, and will wrap up the story in just six episodes. However, it has been rumoured that each episode will be at least 80 minutes long.

Showrunner David Benioff explained to Deadline why the show is ending after season eight.

He said: “The thing that has excited us from the beginning, back to the way we pitched to HBO is, it’s not supposed to be an ongoing show, where every season it’s trying to figure out new story lines.

“We wanted it to be one giant story, without padding it out to add an extra 10 hours, or because people are still watching it.

“We wanted something where, if people watched it end to end, it would make sense as one continuous story. We’re definitely heading into the end game now.”

Season six saw the show overtake the books series that it is based on.

George RR Martin is currently working on the sixth novel in his series, The Winds of Winter, which he has said will be released this year.

The final book, A Dream of Spring, has no firm release date and is not expected to arrive before Game of Thrones ends. 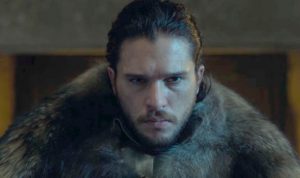 Jon Snow was declared King in the North in season six 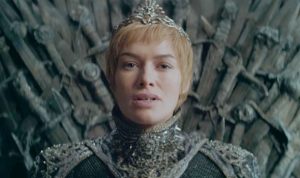 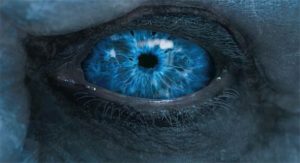 Both trailers have ended with a chilling blue White Walker eye

When did Game of Thrones season 7 start?
The new season premiered in the US on Sunday July 16 on HBO. Sky Atlantic and NOW TV simulcasts new episodes every Monday at 2am