GAME OF THRONES fans have been waiting to see a potential romance between Brienne of Tarth and Tormund Giantsbane for years – and now Gwendoline Christie has dropped a hint that says it could happen in season eight.

The unlikely pair have exchanged flirty eyes since they met at Castle Black in season 6 and now Gwendoline, who plays brave Brienne, has suggested that a romance could blossom.

Speaking on Late Night with Seth Meyers, the 38-year-old explained the difficulties of working with her hilarious co-star: “I’m a classically trained actress, but this is the one time I just dissolve.

“No one told me this was going to happen. All it says in the script is ‘Tormund gives Brienne a look’.

“I wasn’t expecting the power, the magnitude, the intense sexual intentions to pour out of a man’s eyes and just cover me completely.” 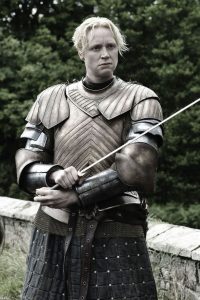 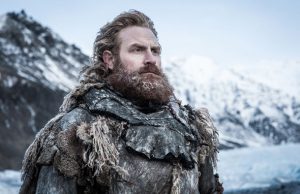 Fans are hoping to see Brienne and Tormund together, should he survive his experience on The Wall

She also joked about how Tormund-star, Kristofer Hivju, never comes out of character, even when the cameras stop rolling.

“[He] will just start chewing a sandwich wildly at me, really making love to that sandwich as he eyeballs me,” Gwendoline laughed.

With this in mind, are fans in line for more flirty exchanges should Tormund survive his fall at The Wall?

This comes as fans seem to have worked out the Night King’s (Vladimir Furdik) grand scheme, which would suggest how the HBO fantasy would end.

One Reddit user posted on the forum: “I predict the Night King is going directly to the Gods Eye. Maybe he has been trying to reach the Gods Eye for centuries and man has always denied this passage.”

The complex theory suggests that the magical lake will resurrect his army of the dead, meaning that the White Walker will have eternal life to ensure that winter stays for good.