“THIS is not a good place to be a teetotaller!” jokes Ana Margarida, my guide at Taylor’s, one of the oldest producers of the sweet, fortified wine extensively produced in Porto. 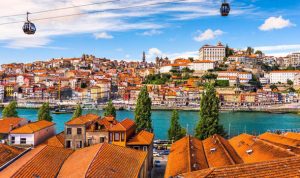 The city sits, fortuitously, at the mouth of the Douro river, about a third of the way down Portugal’s coastline, and its location, coupled with an often cool and humid climate, makes it perfect for storing and ageing Port.

It was Britons, Ana tells me, who discovered this more than 300 years ago, when a couple of English wine merchants visited Douro Valley, the centre of Portugal’s wine production.

Shipping home a few samples of this stronger version of the drink, which is boosted with brandy to add sweetness and alcohol content, a fashion was born. Before long, dozens of British merchants established themselves on the banks of the river in the district of Vila Nova da Gaia, just across from the small city of Porto. These include names many will recognise from the shelves of any decent wine store, such as Cockburn, Croft, Sandeman, Dow and Graham, where they remain to this day. 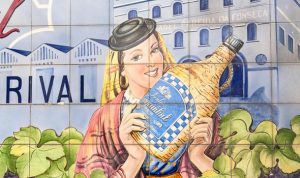 Taylor’s were among the first, setting up their lodge and warehouses in 1692. Today you can pop in for a tour, as you can with most of these producers, and the best bit, try a tasting. From tawny to ruby, dry to vintage, you’ll become an expert (or, after a couple, think you are) in no time.

Thankfully, Taylor’s also owns the handsome wine hotel, The Yeatman (its cellars hold more than 30,000 bottles and wine is even used in its spa treatments). It’s just across the road so you can stumble back to your room fairly effortlessly afterwards. But gazing out over the river from your balcony onto the stunning city vista, all terracotta rooftops, church spires and tall towers, you’ll be keen to explore, no matter how unsteady you are on your feet. In fact, that won’t much matter because Porto is built on a series of hills, so you’ll feel like you’re tilting most of the time anyway.

From Vila Gaia, you cross the impressive, arched, iron Dom Luis bridge, constructed in 1886 by a student of Gustave Eiffel (there are six bridges in total which span the Douro here; take a one-hour cruise from any of the boat companies lining the quayside to learn more about their history).

The best way to get to know Porto is to walk around (ideally before rather than after your Port wine session). With a population of 300,000, it’s fairly compact. Streets are often uphill but they wind appealingly across the city, taking you past beautiful churches – don’t miss the baroque examples of Carmo and Carmelitas, on Gomes Teixeira Square, which boast elaborate blue-and-white tiles depicting religious scenes on their sides – or to jaw-dropping viewpoints such as the Miradouro da Vitória, where you can gaze back over to Vila Nova da Gaia and catch the twin turrets of the magnificent Se Cathedral among other picturesque houses and buildings.

Since I’m a glutton for punishment, and for an even better view, I also decide to clamber the 240 steps of the distinctive Torre de los Clérigos, the long, thin belltower of Clérigos church, which can be seen from most points of the city.